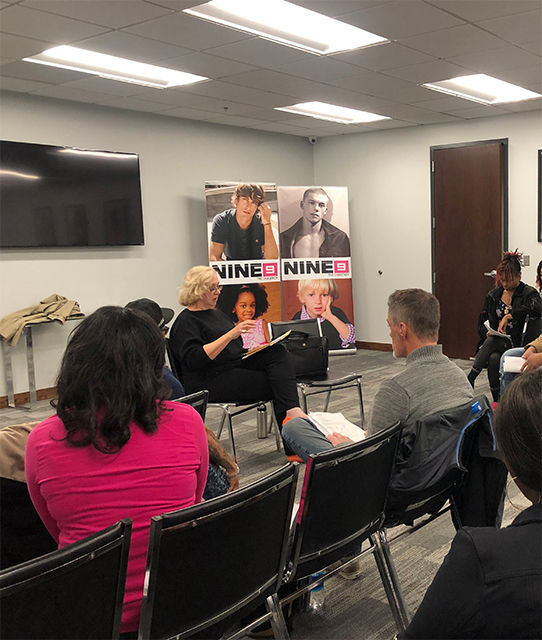 Nine9 recently had an opportunity to interview Corinne Barringer, an accomplished speech and vocal coach, as well as a communications consultant, seminar speaker, radio show guest and one-time cable show host, published author and columnist, voiceover actor, and university guest lecturer.  She offered her advice to both new and seasoned actors from an incredibly inspiring perspective and diverse background, underlining the importance of vocal work in the entertainment realm.  Here’s what she had to say…

Q: What led to your interest in media and entertainment?

A: I suppose I was always leaning that way, even when I was younger and in school.  I wasn’t the class clown, but if there was room in the conversation for a verbal zinger, I’d definitely do that!  I grew up in a diverse neighborhood in south Chicago, in a bi-lingual household, and have always had an ear for accents.  This helped a bit.  At one point, a friend of mine, an English teacher, told me, ‘You speak so well, you should get into [the industry].

I did community theater for a number of years, and I was cast in corporate films.  I got into cable when it first came out and hosted a show called “Accents.”  I interviewed all kinds of different people.  Then, I ended up working with an Indie producer at U-M doing “Good Dinner, Hun,” which was part of a U-M film festival.

More recently, I was cast in a training program for people interested in Scottish history and pre-history because I could do a Scottish accent, could pronounce medical terms well, and have an anthropology background.  It was the perfect combination!

Q: What led to your passion for teaching others?

A: Kids nowadays come home from school and watch television.  We didn’t do that when I was younger.  We went to school, then came home and played school.  And I was always the teacher – imagine that!  So, I started with that sort of mentality, trying to help people.  I did speech therapy in medical settings for a while, in lots of hospitals and nursing homes.  Then I wanted to do corporate speech and was eventually able to lead ESL and accents classes.

Q: What would you recommend voice-over actors do to fine tune their skills?

A: You have to work with someone.  At some point, you have to have someone listen to you.  You can also go to library and grab a grammar book to ensure you master basic grammar skills.  Then, find the right teacher – one who is ethical and knows what they’re doing.

If you have a good voice, one that isn’t damaged by years of smoking cigarettes or over-indulging in alcohol – that type of thing – that’s what matters.  Breath support, delivery, and articulation are also important.

Q: As a radio show guest and cable show host, do you have any recommendations for those hoping to have their own shows?

A: Right now, I’m starting a podcast.  You don’t have to have a cable show.  Just having an idea that’s different helps.  And, you have to get out there and be persistent.  Get a plan and keep at it.  Stay focused, stay on track, and keep auditioning.

Q: Why is it important for all actors to understand the art of voice work?

A: The voice is the actor’s instrument.  You use a lot of different variables – rate of speech, how loud you speak, the intensity, the accent, the quality of your voice.  It all has to do with developing a character.  It’s also important to be aware that there are different methods to voice work like there are different acting methods.  There’s the classic Skinner method and Knight-Thompson method, for example.  You have to have an awareness of what your competition is doing and understand the character you’re portraying. You’ll need to learn how to articulate.  Get a feel for the different methods, try them out, and understand what your ultimate goal is.

Q: What can actors expect to learn at one of your workshops?

A: I’m encouraging people to start learning.  In a two-hour workshop, I can give them a taste of what’s out there, and getting them to think “bigger” – New York or L.A. You have to know what your competition knows.

I touch on specific techniques, such as dialects.  Contrasting the All-American accent (All-Am) with British and Cockney, for example.  And, I always say, if you can’t do it, pick a sound or two and be consistent.  This will make it believable.

Q: What is the single most important advice you can offer to those just get their start in the entertainment industry?

A: Be careful.  There are a lot of good people out there and a lot of scam artists.  Study with someone who knows what they’re doing.  Start with community theater where you can get an idea of what goes into the whole process.  Knowing what happens behind the scenes is a big plus.  Be kind to everyone on set and understand that it’s a team effort.  Learn how to deal with all kinds of people.  Test your skills and develop new ones.

You can also check out our YouTube channel for more interviews with Corinne and so much more!