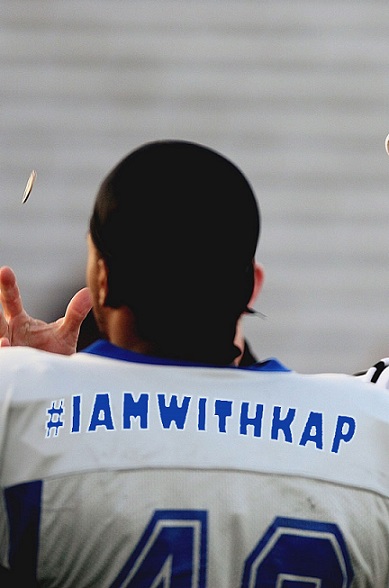 Were you one of the many spectators of this year’s 53rd Superbowl, watching the New England Patriots take the win?  Or, did you opt to boycott it as many stars did?

Leading the opt-out charge was Ava DuVernay, director of A Wrinkle in Time and Selma.  She tweeted ahead of the big game:

“I will not be a spectator, viewer or supporter of the #SuperBowl today in protest of the @NFL’s racist treatment of @Kaepernick7 and its ongoing disregard for the health (and) well-being of all its players.”

She later added, “To watch the game is to compromise my beliefs.  It’s not worth it. #ImWithKap.”

DuVernay was joined by rappers Common and Nick Cannon, actor Erik Jensen and many other outspoken celebrities, all tweeting with #ImWithKap.

Activist and former football quarterback, Colin Kaepernick, stirred up controversy after taking a knee in 2016 during the national anthem to protest racial injustice.  He announced he was selling an official #ImWithKap jersey on his website prior to the event and just an hour later, the jerseys had sold out.  Twenty percent of the earnings were donated to Know Your Rights Camp, a free campaign for youth established to raise awareness on self-empowerment and interacting with law enforcement.

The Superbowl also had an issue with pulling together a solid half-time performance, something actress Amy Schumer gave herself credit for on Instagram, posting: “I have done 2 Super Bowl commercials in the last couple years and I’m so stupid thinking my opinion would matter, right?  Well guess what?  I may have made a difference.  No one is stepping up to perform.  Maybe they wouldn’t have anyway.  But at least I tried to help out and do what other people are too greedy or afraid to.”

Cardi B. and Rihanna were among those to decline.

In the week leading up to the game, an abandoned building in Atlanta with a mural of Kaepernick was torn down, much to the dismay of the artist.

“I just happened to be driving by when they were doing it, and it took a minute for me to mentally recognize that it was happening,” Fabian Williams said, adding, “Symbols matter, man.  You destroyed the whole building it was on?  If I were an interpreter of performance art, what message would you take from that?”