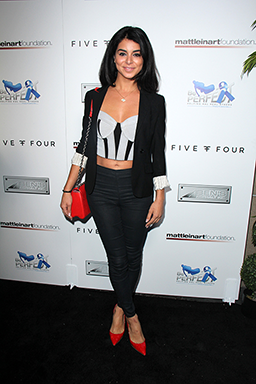 Miss USA 2010, Rima Fakih, was deemed the first Muslim to take the crown.  But she has since embraced a new belief system, converting to Catholicism in 2016.  The Dearborn, Michigan native got her start in the entertainment industry with Nine9, booking a swimwear fashion show and commercial which helped her career to take off.  She made the decision after meeting the love of her life and deciding to start planning a Catholic wedding.

Fakih eventually married Wassim Salibi, who is a Maronite Catholic in Lebanon, where Fakih was raised.  The Maronite Catholic Church has been able to hold onto its Middle Eastern traditions, while being in full communion with the Pope.  The couple currently resides in California with their two children.

Fakih revealed that she attended Catholic schools growing up and her Muslim family was fairly lax on their views.  She also wasn’t the first in her family to transition.  “I have a family that is a mix of different religions and different ethnicities,” she said. “My brother-in-law is Christian and he (and my sister) baptized their two sons.  I have an uncle who converted to Christianity, and he’s a priest now.”

The pageant queen-turned-actress added of her childhood, “We’d go to church on Easter.  We always had a Christmas tree and every year we go the Radio City Christmas Show, and watch ‘The Miracle on 34th Street.’  But we celebrate some of the Islamic holidays as well.”

Fakih opted to connect more closely with her Muslim heritage while in college.  She said it happened “when I went to the University of Michigan, because there’s more of a Muslim community, my dad wanted me to learn more about Islam.  I didn’t know much about Ramadan and other holidays, and my dad wanted me to take that opportunity and learn.”

Some Middle Eastern fans condemned her decision to convert on social media, but others extended their support.  Ultimately, Fakih admits she chose Catholicism in order to be married to her husband, saying it had to do with “matters of the heart.”  However, she seems committed to her newfound faith, even tweeting Bible verses every now and again.

Since her start at Nine9, the actress has booked numerous television gigs, including a role alongside Carmen Electra in “The Choice,” and as a guest judge in an episode of “Cupcake Wars.”  She has also appeared on “WWE Raw,” “The Soup,” “The Apprentice,” “The Wendy Williams Show,” and the “Late Show with David Letterman.”

Fill  out the application below to join Nine9