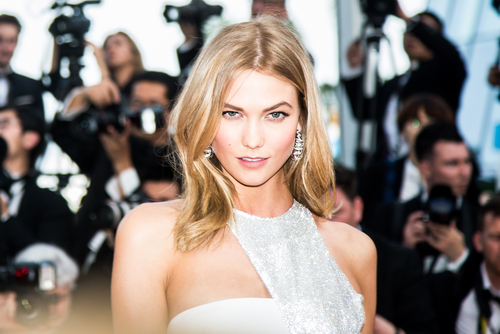 Karlie Kloss is used to turning heads as a Victoria’s Secret supermodel and brand ambassador for many high-profile companies.  Recently, she was able to meet with a few other head-turners in Detroit, capturing her day in the D on her YouTube page.  It was one filled with activism, creativity, entrepreneurism, and all of the other wonderful things the city has to offer.

Right after stepping off the plane, Kloss headed over to Detroit Blow where CEO/Founder Nia Batts’ team helped her “get her glam on.”  The salon is Detroit’s first non-toxic beauty salon and promotes women in the workforce.

“The business is primarily blow-outs,” Batts explained. “The name is definitely representative of the core business of blow-outs, but it’s really a testament to the blows that our city has withstood.”

As such, a dollar from every blow-out and a portion of the salon’s profits go directly to its philanthropic arm, Detroit Grows, which offers microgrants to female entrepreneurs and donations to organizations helping women enter or reenter the workforce.

Next on the list was a visit to StockX’s headquarters, which Kloss referred to as “the stock market of things,” before sharing that she is a “very proud investor.”

Founder Josh Luber met with the model and further explained, “StockX is essentially a stock market for consumer goods…This is the evolution of eBay where now we can buy and sell consumer goods in the same way you buy or sell stocks.”  His company markets handbags, clothing, watches, games, toys, and loads of other retail goodies, and is now the largest market for sneakers and streetwear.

Kloss was enthralled by Luber’s incredible footwear collection, which includes a pair of Game of Thrones Adidas sneakers that have been on her radar but are completely sold out everywhere else, according to the model.  After perusing the inventory, she “raided the kitchen” and “stole some snacks” before heading over to The Beach Detroit, a temporary indoor getaway of sorts that was established to create awareness around the Flint Water Crisis.

The Beach Detroit, which was open in March and April 2019, was a family-friendly enclosed beach-like oasis filled with lightweight recyclable, antimicrobial plastic balls for “water,” tubes and floatables, and beach balls.  Everything else essential to a day under the sun was also included – umbrellas, deck chairs, and two piers at the center where patrons could stand and survey their surroundings.  An interactive installation by New York-based design group Snarkitecture, it was produced by Library Street Collective with help from Cranbrook Art Museum and supported by Bedrock and Quicken Loans Community Fund.

During her visit, Kloss spoke with Little Miss Flint, Mari Copeny, who has distributed over a million bottled waters to Flint residents in an effort to combat the crisis.  The model was encouraged by Copeny’s spirit and her willingness to take up the cause.  “Every voice has more power and impact than we even realize,” Kloss said, telling Copeny,” You inspire me so much.”

After a long day out and about, Kloss offered a final send off to viewers.  “It was an action-packed day meeting amazing people and really getting a taste of all that’s goes on here in Detroit,” she said. “There’s so much that’s happening – so much regrowth and it’s inspiring, so I will definitely be back!”