Your Quirks are Your Superpowers, Says Oliver Stark 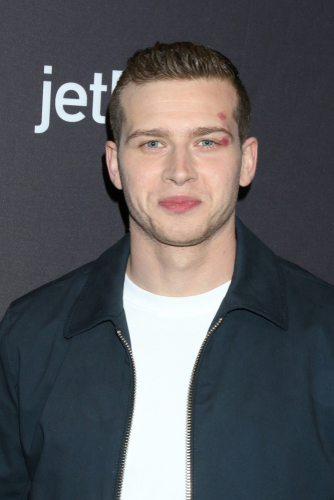 U.K.–born actor Oliver Stark, who can currently be seen co-starring on Ryan Murphy’s “9-1-1” on Fox, said he didn’t exactly have overnight success as an actor.  In fact, in 2017, he was in the middle of a significant dry spell and had to figure out why.

“You’ve been living in Los Angeles for 18 months,” he told himself at the time. “You haven’t worked in a year.  Your last job was your first time as a series regular.  You finished that job and naively thought you’d waltz straight into your next.  Hey, you’ve been a regular on a cable show; bet you want your keys to the city now, huh?  Think again.”

And, Stark would undergo yet another year of no callbacks despite staying out there and active, going to plenty of auditions.  He realized he was running out of money fast and had a visa that was nearing its expiration.

“Honestly, you aren’t sure if you’re going to be able to continue on this path,” Stark said. “Then something very important happens: A casting director who always, always lets you audition refuses to read you for a part.  He tells your manager that, as much as he likes you, you’re just not being consistent.”

Stark pondered this.  He didn’t really know what it meant, but it stuck with him.  Later, he would understand exactly what it meant.  He wasn’t being true to himself.  He was trying to be something – someone – he’s just not, and he still had a lot to learn.  So, the actor signed up for a class, and this proved to be a decision that would change his life.  The instructor told him he needs to be giving casting directors himself rather than the self he thinks they want.

One month later, Stark had an opportunity to audition for “911.”  He wasn’t given a character breakdown or a script in advance.  He just knew there were three scenes, and the lack of information would give him an opportunity to adapt the role anyway he wished.  It allowed him to be himself, just as his coach had said.

“That’s a vulnerable thing to do, but that’s what it takes,” Stark thought to himself while he was in the waiting room.  He was surrounded by actors who were better known than he was at the time, but his determination to be himself pulled him through and landed him the role.

“Now I can admit I spent the first 25 years of my life trying to change who I am,” Stark said. “I hated myself because I had this imagined version of who I wanted to be.  Looking back, this idealized person was an amalgamation of various toxic leading men I would watch in movies over the years.  Cool.  Strong.  Mysterious.  Serious.  Intense.   None of which are inherently damaging characteristics, but they were to me because it was all rooted in me thinking I had to be something I wasn’t.  I thought that if I was able to change myself, I would be more successful.”

But he now understands he had it all wrong and wants to offer this advice to budding actors who haven’t gotten a callback yet.  Stark said, “All the quirks you’ve spent years trying to hide, they are actually your superpowers; they’re what set you apart.  They don’t make you better.  They don’t make you worse.  They make you you, and only you can be that.”