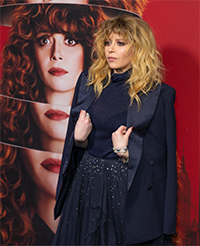 To say that Natasha Lyonne knows acting is an understatement.  The actress has been successful doing everything from child acting in “Pee-wee’s Playhouse,” to voice work, to “American Pie,” and everything in between.  “I acquired a SAG card in 1984,” Lyonne said.

Unfortunately, fame can sometimes come with a price, and Lyonne would have to face her addiction at one point to further her career.  This was a period she referred to as her “black-tar history.”  It’s a period she’s not particularly proud of, but she hasn’t let it stop her.

“Rather than spend so much time wondering if I’m going to get hired or is it a problem that I’ve got this black-tar history, I’ve just got to keep doing what I’m doing and try to be decent,” she said.

Lyonne struggled to get back on her game but was finally able to watch as her career take off once again when she was cast in the series finale of “Weeds” and then for “Orange is the New Black” as Nicky Nichols.  This role enabled her to receive her first Emmy nomination in 2014 for guest actress in a comedy series.  Now, in “Russian Doll” on Netflix, Lyonne is an actor-turned-creator, director, and executive producer, giving audiences a story of rebirth while hinting at addiction and sobriety.

“The things that we really respond to are born on the backs of darkness more than on the wings of victory,” she said. “All that stuff ended up being sort of the music, in a way, of what ‘Russian Doll’ would sound like.  I’d constantly been cataloguing this inner monologue of experience that I was walking through the city streets with, and that would ultimately become Nadia’s voice,” she explained, referring to the series’ protagonist, Nadia Vulvokov.

The months of preproduction and ten-hour days in the writers’ room, memorizing 20 pages of dialogue, still have an effect on the actress, as she also recalls the “back-breaking endeavor of editing.”  In the executive producer role, she has “loads of responsibility” for ensuring all of the minute details of the project come together seamlessly.

“It is not for the faint of heart,” Lyonne said of making television, in general. “I’ve never worked so hard on anything in my life.  It’s shocking how much work it is.  And because you’re made of the fabric of the arts, you’re constantly in a self-doubt.”  But this is what makes the entertainment industry so alluring.”