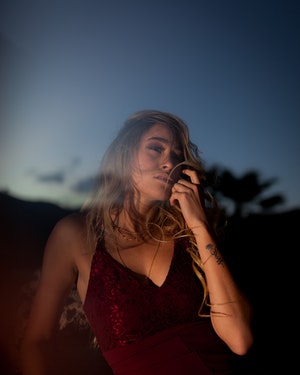 The first weekend of Coachella Valley Music and Arts Festival 2019 kicked off last Friday with musician Donald Glover as the headliner.  Other headliners included Tame Impala and Ariana Grande.  Fans gathered to enjoy a multitude of genres, including rock, pop, indie, hip hop, and electronic dance music, as well as take in the art installations and sculptures.  It was hard not to take notice of the array of fashion-forward attire, too.  Harper’s Bazaar compiled a list of suggestions for party-goers who wondered what to wear.  Here’s what’s been spotted so far.

Camo has been big this year with tube tops, pants, and sandals available in the traditional hard-to-spot print.  And, cowboy boots finished off many of the looks, pairing well with sundresses and shorts.

There has also been a noticeable amount of neon and sparkle on the scene.  Guests were spotted in colorful separates, crop tops, and vibrant splashes of neon.  Many had pastel hair and face paint, and some even wore translucent garb.  Others wore retro apparel and throwbacks to previous decades.

Crochet shirts and skirt mesh overlays of every color were spotted.  Multi-colored crochet tops and purses were especially popular, as was lace added to just about any look, especially in bustier or bodysuit top layers.  Translucent sundresses perhaps offered the perfect excuse to be fully dressed while wearing as little as possible in under the sweltering sun.

Matching tops and bottoms were a natural go-to for many, particularly those in bright, sunny hues, and florals, polka dots, and pinstripes also did quite well.  Snakeskin seemed to be all the rage, added to handbags and belts, sandals and skirts.

Speaking of belts, belt bags were ultra-popular, because they’re both fashionable and practical.  Festival-goers can pack theirs with everything that’s needed to protect themselves from the heat, including sunglasses, sunscreen, small fans, and spritzers.  The bags easily blend in with the rest of a stylish ensemble and allow wearers to go hands-free.  Snakeskin and woven handbags proved to be great options that easily keep with this year’s themes.

The Coachella Festival has been active for decades, dating back to a 1993 concert when Pearl Jam performed at the Empire Polo Club while boycotting venues controlled by Ticketmaster.  This drew attention and validated the site’s viability for hosting large events.  Soon the event was born and musicians from a wide variety of genres continue to deliver show-stopping performances to fashion-forward fans.

Coachella 2019 turned out to be a fashion frenzy of mostly neon and sparkle.  Guests were spotted in colorful separates, crop tops, and vibrant splashes of neon.  Many had pastel hair and face paint, and some even wore translucent garb.  Others wore retro apparel and throwbacks to previous decades.

Fill out an application below to join Nine9