Pay Attention to the Trendsetting Naomi Campbell: Kim and Kylie Do! 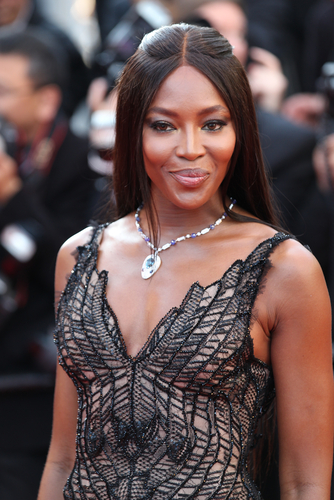 Is supermodel Naomi Campbell trendsetting for Kim Kardashian and Kylie Jenner?  This certainly seems to be the case.  The sisters have been spotted wearing everything the model sports, it seems.  And, we’re not talking fashion choices Naomi selected just last week.  Kim and Kylie are supposedly sporting styles the supermodel wore way back in the ‘90s.

First, Kim wore a vintage purple, green, and aqua Versace dress to Chance the Rapper’s wedding and word on the street was that she copied a look first worn by Naomi on the runway in 1996.  As soon as pics of Kim in the seemingly fashion-forward ensemble surfaced, Naomi updated her Instagram story with a memory of an eerily similar statement down to the exact hairstyle Kim wore to the wedding.  Not so fashion-forward after all.

Then, Kylie wore a crystal necklace and eyewear resembling a look the supermodel wore back in 1994.  She posted a pic of the diamond glasses and matching jewelry on Instagram and a few hours later, Naomi also posted a picture to her Instagram account with the caption “#MOOD”.  The looks were identical.

Placing these two feeds side by side would be convincing enough, but it didn’t end there.  Kim was recently in Paris for Fashion Week where she posted a pic of herself lounging in a leopard print outfit.  Three days after this photo circulated, Naomi decided to post a throwback to 1991, when she wore a similar look by the same designer.  What are the chances the supermodel is really that concerned with posting updates of herself from a previous decade?

One Twitter user ventured to guess Kim and Kylie are copying, tweeting, “Once is an accident.  Twice is a coincidence.  Three times is a pattern.”

Other Twitter users tweeted that Kim’s supposed ‘iconic’ fashion sense may not be her own.  One user said, “She takes credit as an originator, when in fact she isn’t.”  Another commented on how Kim’s hair extensions looked just like Naomi’s, tweeting, “When she is literally wearing the same thing right down to the kinky hair…boo, that’s a carbon copy lmao.”

Of course, as a model, Naomi’s job is to get her fans to wear the items she has access to first.  So, it’s hard to blame Kim and Kylie for wanting to follow suit.  If anything, it should be flattering.  It means that Naomi is a true trendsetter and knows how to work it on the runway.  The rest of the world should be taking notes.