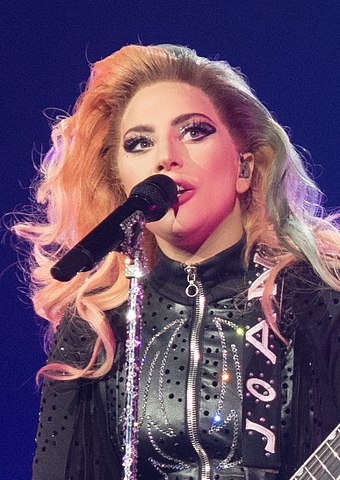 Lady Gaga graciously accepted an Oscar after her song Shallow from the film A Star Is Born won an award for Best Original Song.

“If you are at home and you are sitting on your couch and you are watching this right now, all I have to say is this is hard work,” said Gaga to her fans.  She co-wrote the song with Mark Ronson, Anthony Rossomando, and Andrew Wyatt.

“It’s not about winning,” she continued. “What it is about is not giving up.  If you have a dream, fight for it.  If there is a discipline or passion, it’s not how many times you get rejected or you fall down or are beaten up.  It’s about how many times you stand up and are brave and keep on going.”

Bradley Cooper joined the singer in a surprise performance of Shallow at the show.  This seemed to catch guests off-guard at first.  One minute, Cooper and Gaga were in their seats, the next they stood up unexpectedly, walked onto the stage, sat at the piano and belted out the hit.  When it came time for the chorus, Cooper slid beside Gaga and the two sang into a single microphone.

“She acts, she sings, she writes,” Ronson said of the triple-threat superstar who has been having quite a year so far. “Lady Gaga, we salute you.”

Shallow made it all the way to the No. 5 spot on Billboard’s Hot 100 chart and received four Grammy nominations.  The soundtrack went platinum and debuted at No. 1.  It featured songs co-written by both Cooper and Gaga.

Gaga also won The Critics’ Choice Movie Award for Best Actress this year for her epic role in the well-known film and A Star is Born took home a number of other awards, including the Satellite Award for Best Cinematography and Best Motion Picture as well as a BAFTA Award for Best Film Music.

Fans are whispering about a potential affair going on between Cooper and Gaga, and the singer has revealed her infatuation with her co-star, admitting they clicked instantly the first time they saw each other.

“The second that I saw him,” she said in an earlier interview, “I was like, ‘Have I known you my whole life?  It was an instant connection, instant understanding of one another.”

Of course, even if the pairing is nothing more than professional, the duo’s chemistry is undoubtedly captivating.