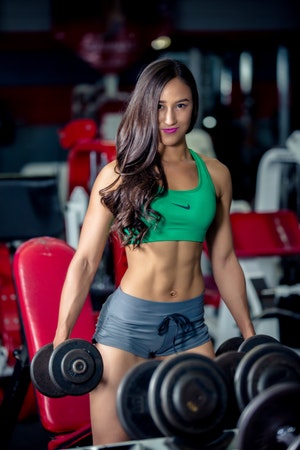 Anfisa Nava, the reality star who appeared on Season 4 of 90 Day Fiancé, recently kicked her fitness routine up a notch and the transformation is head-turning.  Since her husband Jorge Nava was sentenced to two-and-a-half years in prison for drug possession, the reality star has been focusing her spare time on bodybuilding and eating right.

“Swipe to see my transformation,” she wrote to social media followers after showing off her new bod in a two-piece thong bikini. “Which do you prefer—before or after? #fitness #bodytransformation #not10yearschallenge.”

Nava said she started working out to deal with not being able to be with her love.  She posted, “As you know (or maybe not know) my husband got sentenced to 2.5 years in prison on September 7…To be honest, it has been very hard on me because Jorge and I are not just husband and wife but we are truly best friends and we used to share everything with each other and since we aren’t together physically now and only get to talk to each other once a day it feels like a big part of me was taken away.”

She continued, “Now you are probably thinking ok what does this caption have to do with the pictures?  And the answer is, to fill the void that I felt after Jorge was sentenced and I was left on my own I decided to try to stay busy and do what I enjoy the most and it was working out.  And ONE DAY I want to take it on a higher level and compete in NPC bikini division.”

Nava has accumulated quite a fan base, and apparently many people are supporting her goals.  One follower responded enthusiastically, “I wish u all the best and hopefully this time will pass quickly!”

However, not everyone is interested in her journey and, of course, a few haters have voiced this.  Nava has not been shy in responding, commenting at one point, “It feels frustrating when some of you try to knock me down for doing what I love and enjoy.”

The fitness buff is continually sharing workout tips and her progress with fans online.  In fact, she has a whole YouTube channel with more than 370,000 subscribers and regularly posts “physique update” vlogs, which are helpful if you’re looking for a new plan.  She also clues followers into her diet regimen, which includes oatmeal, turkey bacon, eggs, and peanut butter and even some fan favorites she has decided to try after reading comments and feedback.  A picture really is worth a thousand words – and hers is speaking louder than ever.  For some fitness inspiration, check it out!