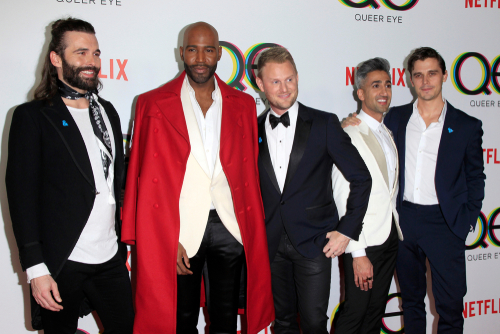 Karamo Brown of “Queer Eye” just proved that it is possible to continue on in a project even when members of the cast aren’t getting along.  He recently revealed he and Antoni Porowski were nothing short of arch enemies when they first started filming the series, and they now blame their animosity towards each other on a “third party” person who was starting rumors about them.

It can be difficult to stay focused when outside forces are trying to get in the way of a project’s success.  Because part of what makes entertainment entertaining is the eclectic mix of many different personality types, however, some are bound not to see eye to eye – even on “Queer Eye.”

Letting personal issues get in the way is almost always a recipe for disaster.  So, rather than allowing off-camera tiffs to derail the mission, professionals often choose to save face while on set.  Think Sarah Jessica Parker and Kim Cattrall’s feuding that could have easily caused Sex and the City to flop, breaking the hearts of dedicated Carrie Bradshaw and Samantha Jones fans everywhere.  When there is a large audience at stake, allowing the ill-will to impact an actor’s performance could be especially damaging to the portfolio.

Brown said, “My castmate from ‘Queer Eye,’ Antoni, people didn’t know that we had an extreme amount of conflict.  We did not talk to each other at all during Season 1, even though we were shooting together.”  He added, “Our personalities got along, but then a third party got involved and once that third party got involved, he and I couldn’t even talk to each other.  We were too busy hearing rumors of what this third party was spreading about both of us.”

Nevertheless, the pair played it cool and took the high road, and on the first episode of Brown’s podcast, they said regardless of what was happening offset, their focus was always on the “Queer Eye” heroes.

Brown explained, “No matter what we were going through, our intention on camera was always to help out heroes.  And I respected this so much about Antoni, and I believe he respected this about me because we would be going through something, but once it was about this other person, we put out issues aside and said let’s help…So it wasn’t that we were being fake on camera, we knew there was a greater purpose, and a greater mission, outside of the B.S. we had going on behind the cameras.”

Fill  out the application below to join Nine9