‘It Runs in the Family’ – At least in The Douglas Family 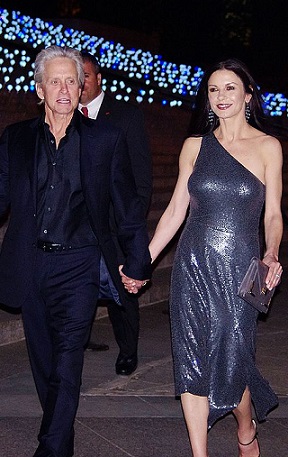 Oftentimes children of Hollywood A-listers follow in their parents’ footsteps and Michael Douglas’s children are no exception.  All three have expressed an interest in acting, much to the superstar’s delight.  Douglas, 74, has three children – Cameron, 40, who he had with ex-wife and film producer, Diandra Luker, as well as 18-year-old son Dylan and daughter Carys, 15, with his current spouse, actress Catherine Zeta-Jones.

Douglas’ father, Kirk, was also a huge star in his day and both are happy Michael’s children want to continue the family legacy.  His niece reportedly also has her eye on acting.

“My three kids, Cameron, Dylan and Carys, all want to be actors, as well as my niece Kelsey,” he said. “I think this sense of immortality and the continuity of generations going on is kind of special.”

Douglas said Carys has a big career as a musician ahead of her as well and believes his two youngest children are both superstars in the making.

“Dylan and Carys have been great students,” he said. “Dylan is off to college now and Carys has a big career ahead of her.  She’s a wonderful singer, plays the piano, and is very pretty.  I think you might be hearing from her sooner than you expect.”

At one point, Cameron had pursued an acting career and starred with Douglas and his grandfather in 2003’s It Runs in the Family.  However, this didn’t last long due to addiction problems that landed him in prison for six years.  He was released in 2016.  Douglas said Cameron is now back on track, gave him his first grandchild, and recently booked a role in the short thriller Dead Layer.

Douglas and Zeta-Jones have long been successful in the entertainment industry and are the perfect duo to help usher their children’s careers along.  They’ve had to fend off their fair share of adversity, however, with their marriage scrutinized by many due to a notable twenty-five-year age difference – Zeta-Jones is only 49 years old.  Instead of letting the gossip get to them, this has only served to strengthen the family’s bond, according to the actress.

“Both Michael and I have a very open relationship,” she said. “When you have kids that didn’t ask to be born into a world where [the marriage is] scrutinized or looked into, you’ve got to be open and honest and share things that probably people at the drug store wouldn’t share over the counter.”

Their support of each other offers a solid foundation to get the kids’ careers up and running.  Fans should be on the lookout for their debut!