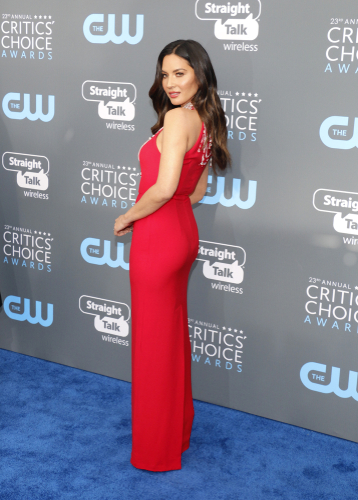 Once upon a time, stars would appear in the pages of print magazines because their keen fashion sense caught eye of a passerby, and readers could admire the attire…or not.  Either way, the only way to disapprove was to simply turn the page.  Now, viewers are all too quick to comment on images online and some celebs are downright sick of it.

Take Olivia Munn for example, the actress who appeared in “X-Men: Apocalypse,” “Ocean’s Eight,” and “The Predator.”  She recently posted an essay in which she calls out the Go Fug Yourself blog that rates celebrity fashion for displaying what the actress called “ugly behaviors” and “blatant hypocrisy.”

Munn had been the target of negative Fug Girl commentary after she wore a striped Peter Pilotto suit to the Asian non-profit Apex For Youth.  The actress was featured on the blog runs by writers Jessica Morgan and Heather Cocks, who commented, “This is just kinda like she got roped into making a sequel to American Hustle that ended up going straight to on-demand. Things could be worse.”

Then, Morgan posted that the Schiaparelli dress Munn wore in Cannes, France, with a frilly bottom made her appear as if she was “peeing a wedding veil.”

Munn had had enough.  She mentioned in her piece that stars often get picked apart and accused The Fug Girls of “perpetual minimization of women and [propagating] the idea that our worth is predominately (or singularly) tied to our looks.”  The actress added, “Their blatant hypocrisy is nauseating.  They claim to employ some sort of subjective barometer for goodness and beauty even though what they do and write is neither good nor beautiful.”

It didn’t end there.

The actress continued to fight back, writing, “Blogs like theirs have been around for a while, with their snarkiness and hypocrisy on full display.  And we’ve accepted it because as women we’ve been conditioned to believe that being publicly chastised for our weight, our looks or our choice in clothing is an acceptable part of our existence.  We’ve been conditioned as women to feel that we must look and dress a certain way to be accepted.  If there’s anything we’ve been able to glean from the past two years, it’s that girls and women have been emotionally and physically targeted and abused for years yet have remained silent because collectively we all believed that our voices, our pain, our existence only mattered with conditions attached.”

Munn also spoke of the blog’s suppression of woman, saying, “Just because you’re a woman doesn’t mean you’re not part of the problem.  The world woke up in 2017 but you stayed sleeping.”  The actress was photographed holding a piece of paper with #TimesUp written on it. She also wrote that “people shouldn’t get away with spewing whatever vitriol they want just by betting on the antiquated notion that the people they target won’t say anything.”

A fan (one of many) responded, “Love this so much.  Women should be building each other up! And for the record your style is always on point, so clearly they have bad taste anyway.”