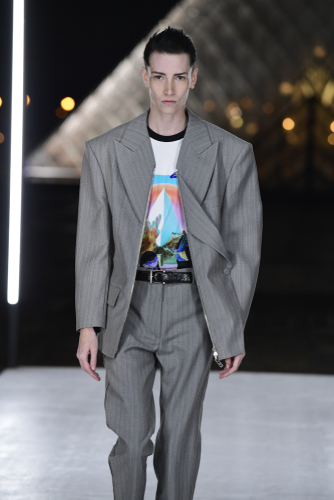 “Getting back into modeling and being a male model, I definitely have a lot more visibility and especially being a trans model, I think, has brought a lot of attention.  So, yeah, my career is definitely doing a lot better than it did the first time as a female,” he said, adding of the Vuitton event, “How I was treated was just so nice and so respectful.  I had my own dressing room downstairs at the show, so they were very, very respectful of that, making sure that I was really comfortable.”

Krow was joined by androgynous models Jessica “Jay” Espinosa and Miriam Sanchez who also strutted the catwalk in masculine clothing back in October. “The clothing that they wanted to put me in just looked absolutely amazing, so I was really happy after I actually got to see what I was getting into,” Krow said.

On the last day of Paris men’s fashion week, Krow was able to walk in both the women’s show for Acne Studios and 1017 Alyx 9SM’s coed display.  Balmain designer Olivier Rousteing also picked him to model one of the men’s looks in his coed show, and that was followed by an offer to participate in the Haider Ackermann and Alexander McQueen displays during the women’s ready-to-wear events.

Krow is feeling very fortunate as he is seeing his career take off, saying, “I honestly love that I can do both the men’s shows and the women’s shows.  I think that that’s really cool to be able to do.  It’s only that I do get anxieties about having them try to make me look specifically like a female.  But I’ve been very clear with my agencies about that, and they’ve made sure to let the casting directors know.”  He added, “At this point in my life, because being transgender, sometimes I can definitely get a little worried that maybe I’m not masculine enough – even though I’m a very flamboyant and usually kind of feminine guy – anytime that I have to wear a dress or a skirt…I do get that kind of uncomfortable feeling.”

Krow has been featured on the covers of Dazed and L’Uomo Vogue and a documentary highlighting his transition are due out later this year.